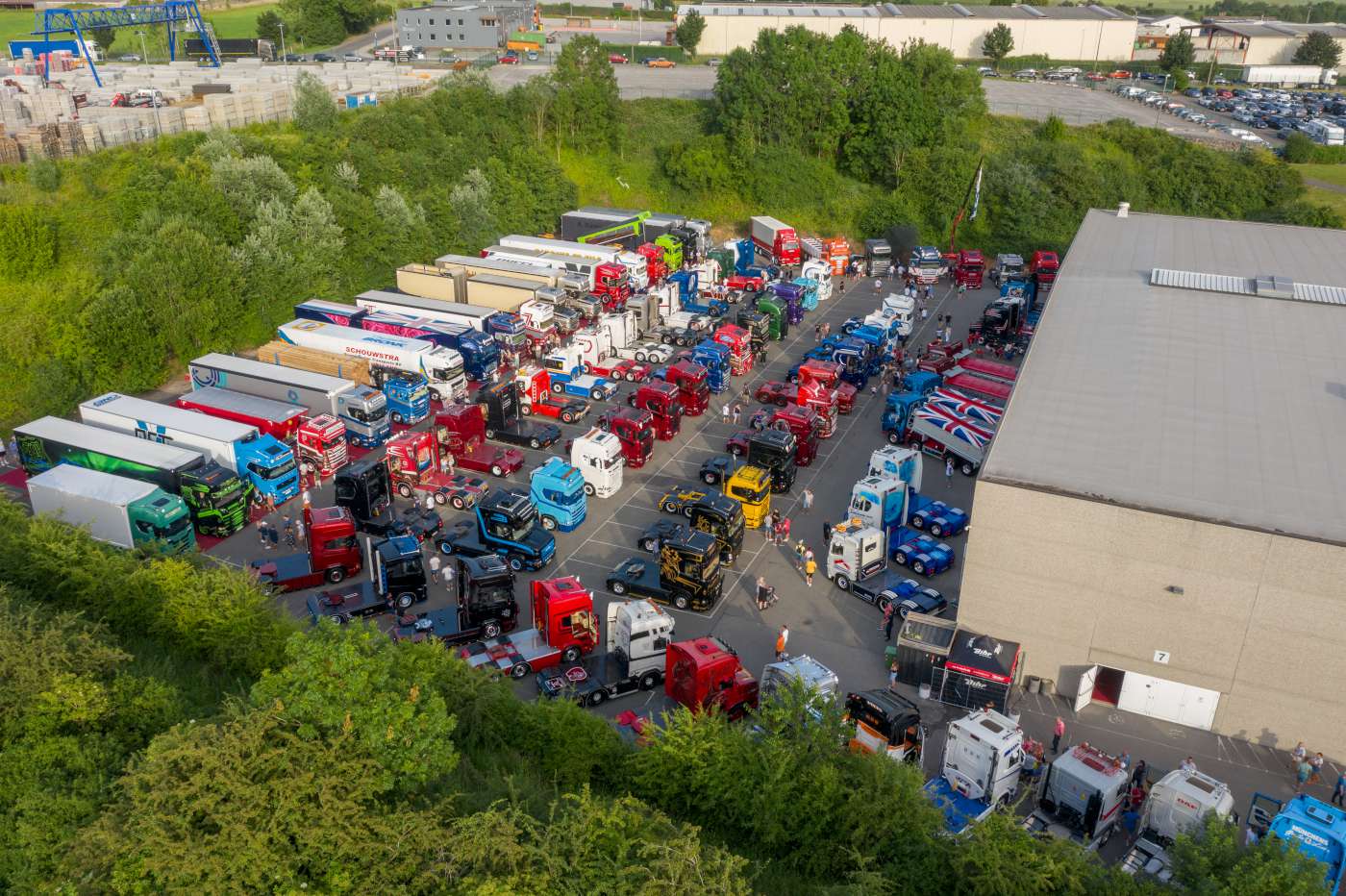 With more than 200 pimped trucks, it can proudly bear the slogan ”temple truck show”. It’s not just Belgian trucks that love to come to this beautiful corner of our southern neighbor. Participants came from all over Europe. From Denmark and Sweden and from Poland to Greece, everyone is happy to show off their beautiful trucks.

Friday is a day when trucks come from all over. There is a private laundry area on site where queues form. All colors you can imagine are available. After washing/spraying the truck, the process of drying, polishing and getting everything ready for the show begins. The first trucks to be on the red carpet inside were already moving in, while the trucks kept coming. Among other things, a complete convoy was organized, in which various participants from, among others, England, Ireland, the Netherlands, Denmark, and Belgium joined together at several meeting places. Unfortunately, not everyone is ready to go yet, but in all, about 25 trucks are on the way. A few miles before Ciney, several more trucks were added, bringing the total to over 30.

On Saturday, when the show opened, it was also one of the hottest days of the year with temperatures around 35 degrees! Dutch company van Wijk responded well, using their eel-carrying Scania 4 series as a swimming pool. The undersigned also returns to the hotel to take a warm, hot and stuffy shower making many people master it. As the sun slowly began to set, the weather became more pleasant, and all the lights in the trucks outside also flashed, illuminating the square around the exhibition with flickering lights, emitting high beams, and draining the necessary decibels, and music.

Sunday afternoon around 4 o’clock everyone came to the front in the hall to see who could take home the beautiful gleaming trophy. Dozens of prizes awarded for custom paint, construction, top 10 overall, and more. The overall top 10 winner is Van Der Heijden’s Scania 650S from Boxtel. The title of the most beautiful show truck goes to the Scania Molander torpedo from Sweden. The last cup was the best of show cup, which was won by Swiss voWa, with the Scania R650 themed “purple rain”. The truck was painted by MW Designs.

Right after the awards ceremony was the great exodus, where many people gathered in time along the local main street. Numerous photo and video cameras were pointed at all the trucks leaving the site after a festive weekend. With the requisite decibels, plumes of black smoke, bells and whistles, everyone came to give the photographers a final show.

Once again we can look back on the very successful show, where the truck level was very high. A beautiful collection of all styles of trucks that are well built, where a lot of time has been spent making them as perfect as possible. After a great weekend back to work, and another year of waiting for this unique gathering, but who knows, we might see a number of attendees during the BIGtruck Tropy on August 6 and 7 in Asten.