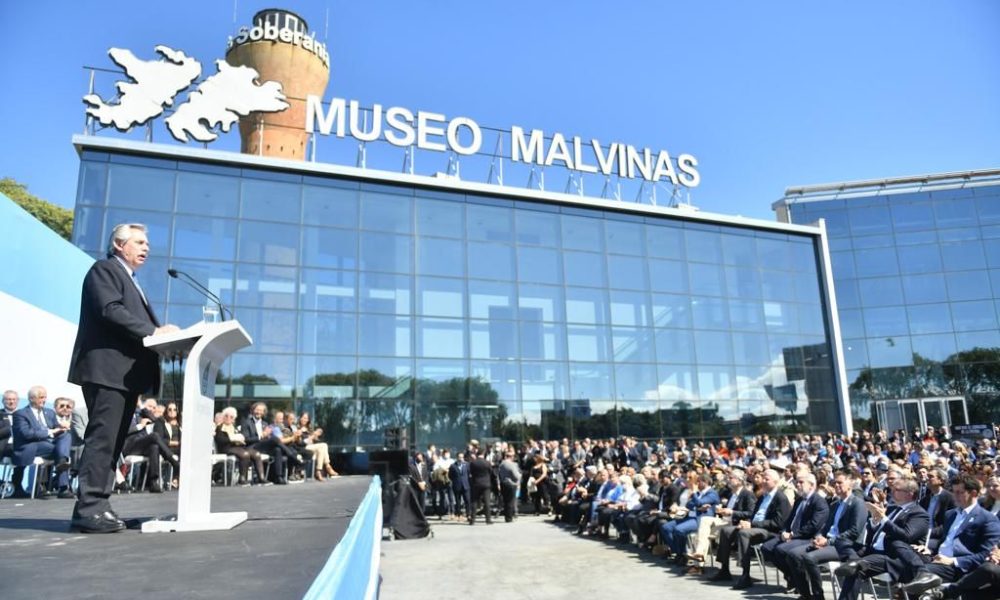 President Alberto Fernández today demanded that Britain comply with a UN resolution to continue dialogue on the sovereignty of the Malvinas Islands and called on it to “abandon an unjustified military presence” in the islands, while acknowledging the “unmatched courage” of former combatants, as this day marks the the 40th anniversary of the start of the war.

He made the remarks while presiding this afternoon at the Malvinas Museum, which is located on the former site of ESMA, the central action for Veterans, Veterans and Fallen Days in the 1982 conflict between Argentina and Britain.

“May the former Malvinas guerrillas never again be forgotten and silenced by any government,” the President said with emotion at the beginning of his speech.

The event was attended by former Latin American president from Uruguay, José ‘Pepe’ Mujica; from Bolivia, Evo Morales and from Paraguay, Fernando Lugo, as well as war veterans and relatives of the victims, Bunda Plaza de Mayo, ministers and national cabinet officials, head of the Chamber of Deputies, Sergio Massa; and the governor of the province of Buenos Aires, Axel Kicillof, among others.

The President’s message began with a request for applause for the soldiers and their relatives who died during the war, and also asked that they pay tribute to the officers who “fought with dignity”, as well as extending special thanks to retired Lieutenant General Martín Balza, a former guerrilla. , attended the event.

Likewise, Fernández highlighted the presence of “three charming friends who have led their respective countries and who accompanied and helped me cope with my birthday on a complex day”, in relation to Mujica, Morales and Lugo.

In his speech, Fernández asserted that the landings at Malvinas, which marked the 40th anniversary today, were “a decision on the back of those who are just trying to confuse and manipulate”, while stressing that “Argentine soldiers faced little meaning, but with enormous courage. and unmatched courage, and support from the people».

«We have to say it: the soldiers who humiliated our Army are a thing of the past that no one wants to go back to. We have achieved it with a people’s mandate, with historical understanding and with political decisions,” he said.

Similarly, the President once again highlighted the “courage and courage” of the soldiers, asserting that “even in defeat they had great integrity”, after which he stressed that “the problem of Malvinas is the policy of the State” and He said that the islands “used to be , is and will be Argentinian”.

In his claim to the British government, Fernández stated: “I call on the UK to comply with UN resolutions,” and once again demanded a “negotiated and peaceful solution” to the sovereign conflict over the islands which still stands.

In addition, he called on Britain to “abandon an unjustified military presence” in the Falkland Islands, as it is a “zone of peace and cooperation.”

“We will continue to work with the deepest respect to restore what is ours, for our rights, in memory of the victims.”

In this regard, the President assured that «today we renew our feelings and beliefs. Malvinas unites us” and highlights the need to “honor those who lost their lives, defend their territory.”

“Every day let’s build a united Argentina that we so desperately need and deserve. Long live the motherland!” he concluded closing his speech which drew applause from the audience.

The action that took place at the entrance to the Malvinas Museum began with the reading of documents reaffirming sovereignty claims, after which the tenor, former combatant and survivor of the sinking of the ARA General Belgrano cruise ship Darío Volonté was interpreted by Fajar.

Then singer Dolores Solá sang the National Anthem, a minute’s silence was observed in honor of the fallen and finally Luna Sujatovich sang the Malvinas March.