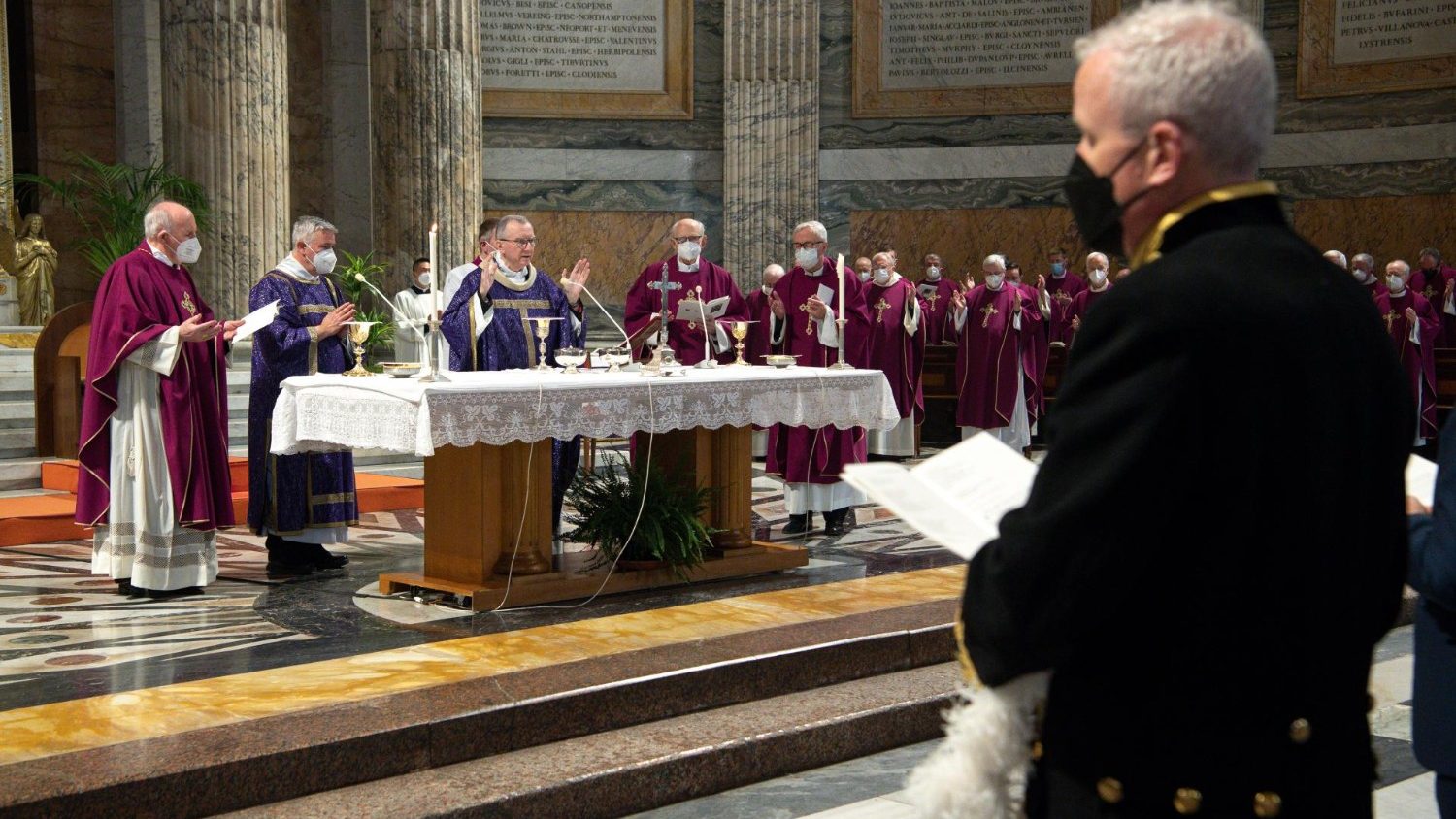 The Secretary of State leads a mass at St Paul’s Basilica Outside the Walls to celebrate the anniversary of diplomatic relations between the two countries, which began in 1982

Through its diplomatic activities, the Holy See wishes to “commit to all people of good will to help humanity rediscover its deepest hopes and desires” and guide them to achieve what they “want and hope for” their material and spiritual well-being. be” (cf. John 5:6)”. This was conveyed by Cardinal Pietro Parolin, Secretary of State, during the Holy Mass which was celebrated on Tuesday morning, March 29, at St Paul’s Basilica Outside the Walls, in commemoration of the 40th anniversary of the establishment of diplomatic relations between the Holy Church. View and Great Britain. .

On April 1, 1982, the cardinal recalled, Sir Mark Evelyn Heath submitted the papers with which Queen Elizabeth II accredited him as her first extraordinary envoy and plenipotentiary ambassador to the Holy See. This event, he added, marked “the culmination of thoughtful and delicate work to restore full exchange and fruitful cooperation between the two institutions, heal past wounds and open this relationship to mutual hope.”

At the same time, the Foreign Secretary explained, contacts between the Apostolic See and Great Britain “are not at all recent.” In fact, they “cover a period of nearly fourteen centuries,” going back to the days when the “apostle from England,” Augustine of Canterbury, a Benedictine monk, was sent by Gregory the Great to bring the gospel of Christ to the world. English.

St Paul’s Basilica Outside the Walls, the cardinal said, is a witness to “the historical closeness of the British monarchy to the See of Peter.” Indeed, the king of England not only “visited the tombs of Peter and Paul in the city”, but is known “towards the end of the Middle Ages also acted as patron of this same Pauline basilica”. More recently, he recalled, even “before the establishment of full diplomatic relations,” Queen Elizabeth II made several visits to the Pope at the Vatican during her 70 years of service to the people of England and the Commonwealth. Of course, he insisted, 1982 will continue to be a year “to be remembered not only for the establishment of the relationship between the Holy See and Great Britain”, but also for Saint John Paul II’s apostolic journey to Great Britain, “the first time in the story that a Bishop of Rome stepped on British land”.

This observance, the cardinal said, takes place during Lent, a 40-day period of prayer, fasting and almsgiving in preparation for the celebration of the Lord’s resurrection on Easter.

The theme “water connects today’s two readings”. The prophet Ezekiel, the cardinal added, “had a vision of the temple in Jerusalem with water flowing eastward from under the temple into the desert, bringing life and health wherever it flows.” Very imaginatively, Ezekiel “states that God’s presence in the temple gives life to all people.”

On the other hand, in today’s Gospel, it was not “the water of the pool near the Sheep Gate in Jerusalem that brought the lame man to life, but Jesus himself.” Jesus, “the face of mercy the Father”, approached the pool of Bethesda, “a name meaning ‘house of mercy’, a place where many blind, lame, and lame people used to lie under the veranda, waiting for the angel of the Lord to come to stir the waters, and that whoever enters the pool first after the water has been shaken will recover from his suffering.”

Jesus, the Secretary of State explained, “saw a man who was crippled for thirty-eight years, and he himself took the initiative: ‘Do you want to be healed?’ Someone may ask: ‘Why did Jesus need to ask such a question? Wasn’t it obvious that the man wanted to be healed?’ The question, said the cardinal, was no exaggeration. Jesus gave the man “the opportunity to tell his story and help him get the desires out of his heart.”

Lastly, the Cardinal recalled the Act of Consecration of Russia and Ukraine to the Immaculate Heart of Mary carried out by Pope Francis on March 25, inviting people to pray more fervently for peace.

On the occasion of the 40th anniversary of diplomatic relations between Britain and the Holy See, the British Ambassador to the Holy See, John Christopher Trott, expressed his satisfaction with the event over the microphone of Vatican Radio, in an interview with Linda Bordoni.

“This relationship – he said – is now more important than ever if we look at the problems afflicting the world, including the war in Ukraine. Trott recalled that Pope Francis described the war as a “barbaric act” and said that “the role of the Holy See is crucial to creating a world that is peace, a more just world, to achieve the Sustainable Development Goals, to eradicate poverty and work for the common good.” For this reason, the ambassador concluded, “our bilateral relationship is fundamental. and as relevant today as it was in 1982”.