Climate: UK issues red alert for heatwave that has killed more than 300 people in Europe 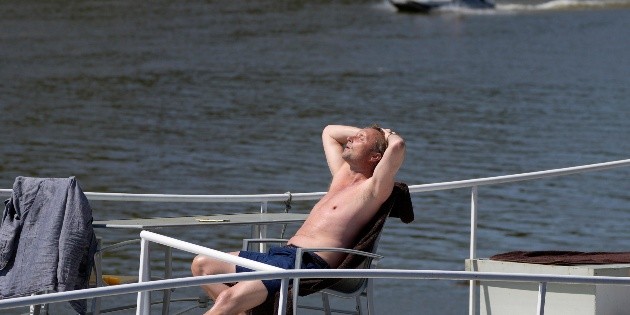 With more than 300 people have died in recent days in Portugal and Spain -besides widespread fires- due to the heat wave in the Iberian Peninsula, great Britain issued this Friday for the first time a red alert before the arrival of high temperatures this weekend.

in spanishdata from the Carlos III Institute of Health under the Ministry of Health show that only for first three days of heatwave – between 10 and 12 July – 84 people died as a result of the record temperature effects that have been recorded today.

Many Spanish cities -Madrid, Seville, Zamora, Orense and others- have seen 40 degreesalthough at present the national maximum has not been reached, which has been held by the municipality of Montoro (Córdoba) since last summer at 47.2 degrees.

The situation is even worse in Portugal, whose Directorate General of Health calculates, between 7 and 13 July, the “excess deaths” of 238 above-average deaths common today, that figure is also associated with high levels of mercury.

Dehydration, decompensation, or chronic illness are some of the factors that can suddenly worsen a person’s state of health to the point of fatal outcome.

Portugal broke its record for hotwith maximum 47 degrees registered in Pinhão-Santa Barbara (Viseu), a situation the World Meteorological Organization (WMO) fears will repeat itself in some European countries such as the UK.

In the case of London, the agency has warned today that this weekend it could hit 35 degrees, 10 more than the average for the UK capital on these dates.

The UK record is held by Cambridge at 38.7 degrees since 2019, but WMO considers there is a 30% chance of surpassing it in the coming days.

That’s why the United Kingdom Meteorological Office (Met) today issued a red alert for the first time in central England – from London to Manchester and even the York Valley -, where the heatwave is expected to arrive from next Sunday through to Tuesday.

The Met believes that thermometers it would easily exceed 38 degrees and could reach 40, an official record has never been reached in the country, so British authorities have asked residents to take precautions in “potentially serious” situations, taking into account that their homes are better prepared for rain and fog than excess heat.

Similar precautions are planned from the neighboring island by the Irish Meteorological Office (Met ireann), which also issued a heat alert today, albeit orange, not red, for this weekend and early next.

The forecast points to the hottest days are Sunday, Monday and Tuesday, when the thermometer can range between 25 and 32 degrees Celsius, “very unusual” conditions that will continue to “create discomfort” after dusk with nights between 15 and 20 degrees Celsius, approaching what the Irish consider a “tropical night”.

The highest temperature recorded by the Met ireann was from the summer of 2006, with 32.3 degrees Celsius in County Roscommon.

Meanwhile, the most visible face of the heatwave in the Mediterranean continues to be fire: in France there are three fires that are out of control and the worst continues to happen in the southern part of the Gironde department, where 7,500 hectares have been burned and more than 11,300 people have been evacuated.

President Emmanuel Macron himself, who today visited the Interior Ministry’s crisis cell to follow the situation, admitted that this season was “exceptional because of the severity”, because so far this year the amount of land has burned three times in 2020 .

As in the Iberian Peninsula, which from France this is the second summer heatwave: although it started a little later, it has pushed the mercury to 38 degrees and Paris is expected to hit 41 next week.

Greece is better in temperature thanks to the north wind reaches a strength of 6 on the Beaufort skala scalebut precisely these strong gusts helped spread several fires in the capital region of Attica and on the island of Crete, where some districts need to be evacuated preventively such as the city of Orne.

Get the latest news in your email

Everything you need to know to start your day