In the end, the consequences of Brexit (1st step 1-1-2021) for imports of fresh fruit and vegetables into the UK are limited. At least in terms of quantity. Much has been said about all kinds of other effects in various places. Jan Kees Boon of Fruit and Vegetable Facts shares his analysis below.

Total imports to the UK are also practically the same in 2021 as they were in the previous four years. By 2021, excluding bananas, a total of under 5 million tonnes were imported, as in four years. At the macro level, there is only a slight shift from imports from EU countries to imports from EU countries. This concerns no more than 150,000 tonnes or 3% of the total. Of the 150,000 tonnes, 90,000 tonnes can be accounted for through trade, previously through the Netherlands and now some directly to England. This is also the case in Belgium and Germany, but in these countries the number is smaller.

Furthermore, it seems that in the first half of 2021 relatively more imports from non-EU countries and less from EU countries. That no longer happened in the second half.

Fewer bananas
Of course, if we dig deeper, there are differences between imports in 2021 and before. Among the big products, the import of the smaller bananas stands out the most. In the past year, it has fallen below the 1 million mark for the first time. With 0.94 million tons, even almost 10% lower than 2020. Previous years were even more so. Re-exports via EU countries are already small and will logically almost completely disappear by 2021. Direct imports of bananas to the UK also fell sharply last year. 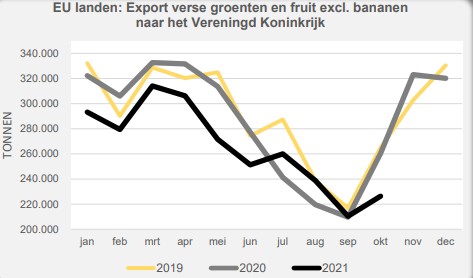 The decline in tomato imports from European Union countries was also striking. Compared to 2020 it is reduced by 13% and compared to 2019 even 20%. Imports from Spain in particular fell sharply. This may be partly due to fewer re-exports of Moroccan products.

Spain is by far the largest foreign supplier to the UK, followed by the Netherlands. Then followed the big gap to South Africa, Morocco, Egypt, Brazil, France, Italy and Poland.

The share of EU countries in imports of fresh fruit and vegetables excluding bananas fell from 64 to 61%. 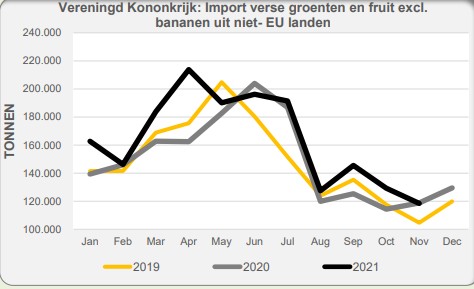 South Africa’s largest non-EU supplier
Imports of fresh fruit and vegetables excluding bananas from non-EU countries are just under 10% higher in 2021 than in previous years, when imports were fairly stable. South Africa is a major non-EU supplier. Imports from the country were able to grow by 6%. South African apple imports in particular grew strongly.

South Africa’s imports of mandarins and oranges, on the other hand, were slightly smaller last year than the record year 2020. In 2021, more South African plums and pears go to the UK.

Moroccan Benefits
The country that has benefited the most from Brexit is Morocco. Imports from the country grew strongly (+36%). Imports of Moroccan tomatoes in particular grow. In total, this came to nearly 110,000 tonnes last year, compared to 83,000 tonnes in 2020 and less than 70,000 tonnes in 2019. That was even less before that. Imports of Moroccan mandarins are also growing, but not so spectacularly. Reasonable quantities of watermelon from Morocco are also being shipped to the UK, but imports of other products remain low for now.

Also more from Egypt, Brazil and Peru
Egypt is the third supplier from outside the EU. Last year, although more (+15%) was imported from the country than in 2020, it was less than in 2019. Oranges were the main product imported from Egypt, followed by onions, grapes and sweet potatoes. .

Imports from Peru also continue to grow, but the growth in 2021 will not be that great. This is mainly because Peruvian citrus imports fell sharply. Avocado and mandarin imports from Peru grew vigorously.

Imports from Chile and the United States declined. In Chile this was due to a sharp decline in avocado imports. Other products do show growth. The image in the United States is almost entirely defined by the sweet potato.

Overall, Spain is by far the biggest
Spain is by far the most important supplier to the UK with exports of 1.64 million fresh fruit and vegetables in 2020. That’s 2% less than the previous year. In 2021, Spanish mandarin exports to the UK fell sharply. On the other hand, there is a significant plus for peppers and cauliflower. Exports of cucumbers and oranges lagged slightly in 2021 and exports of tomatoes fell sharply. Exports of Spanish watermelon grapes are growing strongly.

Much less re-export via the Netherlands
Exports from the Netherlands to the UK in 2021 are by far the smallest in recent years. Compared to 2020, it fell 12% or 110,000 tons. Of these, at least 92,000 tonnes can be explained by the loss of re-export of products such as avocados, grapes, mangoes, etc. Dutch product exports were slightly smaller. In terms of quantity, onions are the most important product, followed by tomatoes.

Also less re-exports via Belgium
Belgium exported far less to the UK last year than before. The total is 87,000 tonnes compared to 105,000 tonnes in 2020. Even more before that. This decline was mainly due to the loss of re-exports, among others. kiwi, banana and mango.

In the last year, the number of Belgian pears that can be sold in the UK, which is 42,000 tons. However, apple exports to the UK continued to decline.